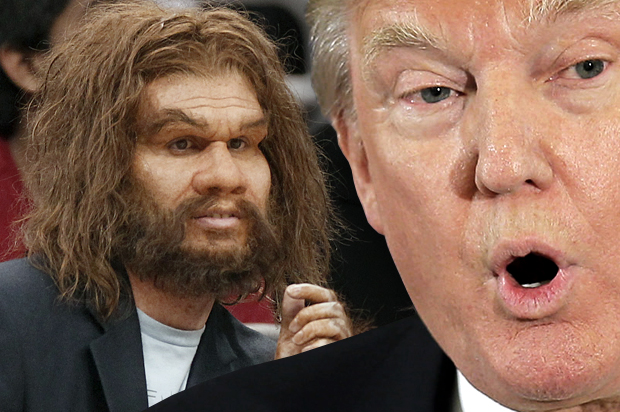 Neanderthals for Trump: How our primitive brains are ruining American politics – Salon.com, April 19, 2016

[Trump] knows what you’re feeling, and that’s what an awful lot of politics is. When a politician talks anger and they talk fear, they are mainlining, just like a heroin addict, going straight for the most sensitive parts of the brain because fear and anger are those emotions that we really relate to. And when a politician engages and indulges people’s fears and their angers, they seem really authentic. That’s why Donald Trump seems so authentic to so many millions of people because these emotions are so strong and powerful.

Q: Why are anger and fear so paramount in the stone-age brain?

A: For people who were very sensitive to anger and fear, apparently, our evolution proves it, that was a habit of thinking that contributed to their survival, to their fitness.

Q: They’ll take more precautions than somebody who doesn’t hear the alarm go off, right?

A: Exactly. There is something called the false alarm bias. What happens is our brains are like good detectors in your home that are looking for gas or for something else, some sign of fire—

A: Exactly, burglars. They’re on a hair-trigger alert. They just detect a little bit and all of a sudden they start blaring. Well, our brain comes with a similar mechanism and that is to help protect us from danger. So the people who are going to be more likely to survive a dangerous attack were those who would be able to be sensitive to when a dangerous attack was coming.

When Donald Trump is attacking Mexican immigrants or Muslims just trying to come visit the United States, he is activating this deep-seated cognitive bias that we have, which is the false alarm bias. We want to make sure that we respond to a fire alarm. And if it’s a false alarm, that’s okay, because the fire alarm goes off, everybody gets excited, they go out on the sidewalk and then they come back in five minutes later. So, meh, it’s okay. But if you miss a fire alarm, oh my gosh, you’re really, really in trouble. We’ve got this bias that basically says we’re going to react to the fire alarm, even if we’re going to err on the side of better be safe than sorry.

And when Donald Trump and these other politicians activate that bias, what happens is it swamps critical thinking. We have higher order cognitive functions and we are able to evaluate the world as it is and not give in and surrender to these automatic responses. But when a politician activates that response, it’s very, very, difficult in the moment to think clearly. And that’s what these politicians are doing.

[…] [T]here’s something that the social scientists refer to as perceptual salience, and basically what that means is that we respond to the signals in the environment that we’re familiar with. So anytime we hear some evidence of something in our own experience, or we’re seeing it on the news constantly, that becomes part of our social reality. And we live in that soup of all these mixed signals out there. And what Donald Trump is doing when he’s saying the political parties are corrupt, as soon as he says it, it’s politically salient because we’ve all heard evidence of the corruption of the two major parties and how they managed to get themselves elected; or to elect their people; and how rich people contribute money to the campaigns; and the corruption, and all that. That’s salient because we hear all about it. So all a politician has to do is touch that button and one of his supporters will say, “Oh, yes.” So it rings true.

A: Sure and this helps explain why millions of people still believe that Barack Obama is a Muslim born in Kenya. It’s incredible to any thinking person that anybody could believe that, but these people aren’t thinking, they are reacting.

[…] [I]n their small circle, they’re hearing from people suspicions about Barack Obama […] And they hear that and that plays into a narrative, a metanarrative, a metacognition that resonates with them. […] So they create this metanarrative in their head and everything that is consistent with that metanarrative, they wind up believing. And everything that is inconsistent with it—that would give them cognitive dissonance if they were to try to hold that thought in mind in addition to the other thoughts—they get rid of. They get rid of it. […]

[E]ight years ago I wrote a book called Just How Stupid Are We? as you mentioned. I was appalled by the statistics coming out during the Bush years that so many millions of people thought that we were invading Iraq out of revenge because Saddam Hussein had something important to do with 9/11. Now there was no truth to that, but if we can’t get the most basic facts right about the most important event of our time, 9/11, that says our democracy is in trouble.”

Source: Neanderthals for Trump: How our primitive brains are ruining American politics – Salon.com

So: Welcome to the world of “post-fact politics,” where it doesn’t matter whether anything actually is true, as long as it feels true and responds to our innermost caveman triggers and alarms, the chief ones of these being fear and anger.

1984, anyone? (Since Humpty-Dumpty’s “When I use a word … it means just what I choose it to mean – neither more nor less” would barely seem to scratch the surface here?)

And yes, as much as 20 percent of the Neanderthal genome does live on in modern humans, accounting for – on average – between 1% and 4% of the modern human genome, due to some more-than-casual cross breeding of Neanderthals and homo sapiens after homo sapiens had begun to migrate to Europe some 60,000 – 45,000 years ago.  Phyiscal features that the Neanderthals have passed on to us include red hair, a receding, elongated forehead, the brow ridge above our eye sockets, and a prominently protruding nose.  And according to a 2016 DNA analysis conducted by the Howard Hughes Medical Institute at Harvard Medical School, the genetic material of the incoming U.S. President just might be made up of a whopping 39% of Neanderthal heritage.  (His supporters dispute those findings.  Well, there are also a few people who dispute evolutionary theory.  Not coincidentally, those two groups overlap.)  Not that you’d notice what this guy is really made of in any other way than by his physical appeareance, obviously … Image sources: Imgur.com and N24 News.
The image to the right shows an exhibit at the Neanderthal Museum near Düsseldorf, Germany. 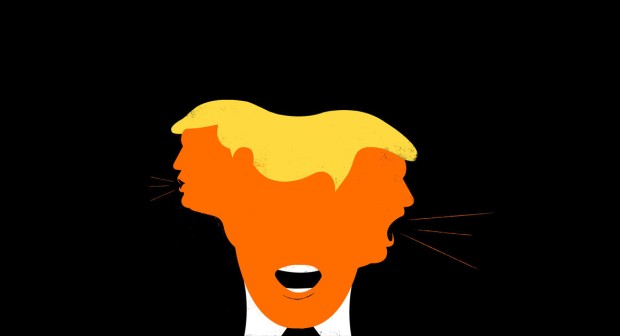 “When I use a word,” Humpty Dumpty said, in rather a scornful tone, “it means just what I choose it to mean—neither more nor less.”
Lewis Carroll: Through the Looking-Glass (1872).

(I’d sworn I’d stay out of the U.S. electoral campaign, but this is just too good not to share.  And it doesn’t even include his most recent meltdowns …)