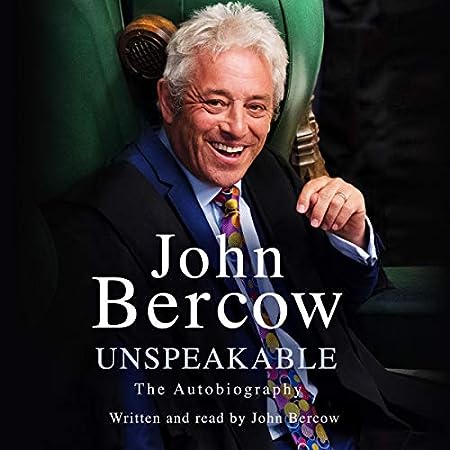 An impromptu buddy read with BrokenTune; delivered in Bercow’s trademark style and doubtlessly offering as much fodder to those determined to hate him as to those who regret his stepping down as Speaker:

I, on the other hand, found myself glued to my phone — this is a riveting narrative (even the bits about his early parliamentary career; and definitely his take on the role of Speaker: to be an advocate for Parliament and enable it to hold Government to account — as well as the chapter the reforms he introduced, particularly those behind the scenes). And, of course, a large part of the pleasure was due to having Mr. Bercow read the book to me himself; he really does a stellar job.  Listening to him, even more so than as a result of his performance in the Speaker’s chair (spontaneous quips and all), it was easy to imagine how he was capable of holding an audience captive from early on in his career — if he hadn’t chosen a path in politics, he’d easily also have done well in any other job requiring an ease at public performance (e.g., broadcast journalism or the stage).

There’s less of an explicit analysis of his shift in view from the Thatcherism of his younger days to his decidedly more left-leaning present stance — it comes across as a gradual progression in views, influenced in part (but apparently not exclusively) by his wife, a long-time member of the Labour Party.  However, while he stands by his earlier views and the manner in which he chose to express them at the time (his attitude seems to be “it was what it was and it’s part of my history — simple as that”), he doesn’t shy away from characterizing his early political performance as “shrill” and in other similarly unflattering terms.

Mostly, though, I loved his incisive (and insightful) analysis of the various governments, PMs, ministers, party whips, and other politicians he has witnessed in office over the course of the past 2+ decades, all the way to David Cameron

(“I am reminded of the verdict of the man he worked for and considered a friend, Norman Lamont: ‘Cameron was clever, but not profound.’  That is true.  In the pantheon of great leaders, the name of David Cameron will never feature.  In a list of opportunist lightweights, it will be at the top“)

(who “is not a bad person — she wants the best for her country, without a clear sense of what that is: rudderless, without imagination and with few real friends at the highest level she stumbled on day to day, lacking clarity, vision, and the capacity to forge a better Britain.  In a contest as to who has been the worst Prime Minister since 1945, it is hard to choose between Anthony Eden and Theresa May“).

Bojo and his cronies also collect their fair share of authorial broadsides, beginning with the takedown of Geoffrey Cox, Boris Johnson himself and the prorogation disaster in the book’s “Prorogue” (talk about an appropriately-titled opener).  That said, and perhaps unsurprisingly, Bercow sings the praises of Tony Blair and Gordon Brown — as well as of the likes of Dominic Grieve, Oliver Letwin, Ken Clark, Anna Soubry, Yvette Cooper, Caroline Lucas and, interestingly, also Jacob Rees-Mogg and Bill Cash (though he has little sympathy for their politics and none for their ERG / right-wing Tory cronies, particularly not for Michael Gove and Andrea Leadsom).  Similarly unsurprisingly, the entire clique of moneyed, entitled, public school / establishment figures within the Tory party are getting their much-deserved and well-argued kicks in the shins both individually and collectively … Bercow really has come a long way from his early days in the party.  Yet, he insists that he has always felt he was in a better place remaining a Tory and holding the party to account from inside, than by changing his political affiliation — which, given how much those now calling the shots in the party have come to hate him, can’t be an easy stance to take.  (No wonder they tried several times, though always unsuccessfully, to get rid of him as Speaker.)

The final part of the book contains much that Bercow had already said repeatedly while still in office, be it in interviews or from the Speaker’s chair; yet, while he doesn’t hold back with criticism of those whose stance he considers irresponsible, he is also scrupulously fair to all those who, he genuinely believes, are working hard to realize the political aims they consider in the best interests of their constituents.  In fact, the chapter about what, in Bercow’s opinion, makes a “good” politician, is possibly the most surprising inclusion in the book (and the book worth a read for that chapter alone), heaping praise (and in some instances, scorn) on a wide array of politicians of all parties, regardless whether Bercow shares their views or not. —  Even if no longer from inside the Houses of Parliament, I hope and trust Bercow’s voice will remain relevant and weighty in the months and years to come.