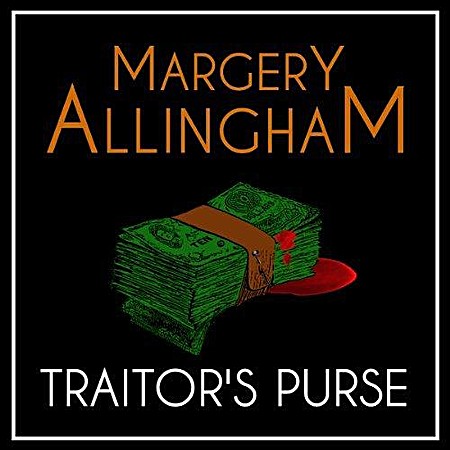 Well, I suppose that’s what I get for not checking a book’s online blurbs before reading it.  I downoladed this book purely because it was available on Audible and it was one of Allingham’s Campion that I hadn’t read yet.  Turns out its plot chiefly rests on not one but two mystery tropes I don’t particularly care for: the amnesiac detective and “Fifth Column” shenanigans, Golden Age mystery writer variety.

A few hours before the beginning of this book, Campion — out on a secret mission whose full details are only known to him and Oates — has gotten himself coshed on the head.  The book opens with him waking up in a hospital not knowing who he is and how he got there.  From an overheard conversation he concludes that he has been involved with a violent altercation that ended in the death of a policeman.  Within minutes, a young lady named Amanda whom Campion doesn’t recognize but who seems to know him very well appears next to his hospital bed and whisks him away in what he discovers is his own car, to the house of an eminent scientists where, it turns out, Amanda and he are staying.  Campion also discovers that he seems to be involved in some sort of highly charged top-secret mission.  Now, instead of lying low until he has regained his wits and knows precisely who he is, what his role in that ominous mission is, whom he can trust, and what not to do if he doesn’t want to give himself away — and despite the fact that that same evening a death occurs that may well be connected with the ominous mission — Campion starts running around like a headless chicken trying to bring the whole thing to completion.

Which brings us to trope no. 2, and which in its details is just about as ridiculously implausible as is the amnesia part of this book’s plot.  Yet, the saving grace of this second part of the plot is (alas) that in the days of Russian meddling with the American and European democracies’ political process via Facebook campaigns, “fake news” and other instances of rumor mongery, the mere concept of an enemy power’s meddling with a country’s political process (here: by way of manipulating the target country’s monetary politics) does unfortunately no longer sound quite as ridiculous as it might have even a few years ago.

Still I really would have wished Allingham hadn’t tried to match Christie in the wartime spy shenaningans game — which was not a particular forte of either of them.

I listened to this book for Square 16 of the 16 Tasks of the Festive Season, Kwanzaa: Read a book written by an author of African descent or a book set in Africa, or whose cover is primarily red, green or black.