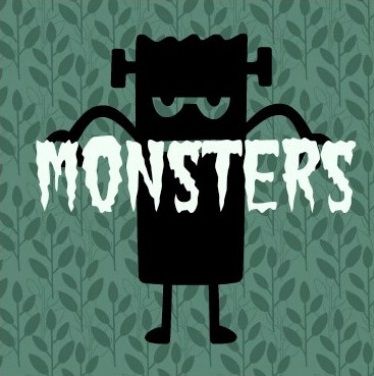 For the “Monsters” square, I decided to revisit Ovid’s Metamorphoses — I had initially only been planning on the “Perseus and Medusa” and “Theseus and the Minotauros” episodes, but David Horovitch’s fabulous reading drew me right back in and I decided to — with apologies to Odysseus and his companions at Circe’s court — go the whole hog after all. If you only know Mr. Horovitch as the Inspector Slack of the BBC’s 1980s adaptations of Agatha Christie’s Miss Marple mysteries, do yourself a favor and run, don’t walk to get an audiobook narrated by him.  I recently listened to his reading of Edith Wharton’s Age of Innocence, and his narration alone lifts the gut-punch quality of that novel to a wholly different visceral level in a way I would never have believed it to be possible, short of Franco Zeffirelli’s movie adaptation, that is.  I get goosebumps merely thinking about that audio recording.

The Metamorphoses are Roman poet Ovid’s tour de force parcours through a millennium’s worth of Greek and Roman mythology, focusing on the stories that (as the title says) involve some sort of transformation of one being into another — nymphs into plants and animals, humans into all sorts of creatures (animal, vegetable, mineral, you name it) … and of course, gods into whatever they please to be as well.  The book begins with the Greek creation myth (the three “prehistoric” ages — golden, silver, and iron –, the creation of humanity from “the bones of mother Earth,” i.e., rocks, by Deucalion and Pyrrha after the end of the Deluge, and the beginning of a new age), and it successively moves forward until it reaches the Trojan War, the travels of Aeneas, the mythical origins of Rome and, finally, the ages of Caesar and Augustus (i.e., Ovid’s own lifetime).  The narration is somewhat difficult to follow at times, as it is not strictly linear and contains numerous “stories within a story”; yet, for its sheer narrative and topical audacity this is justifiedly one of world literature’s great classics.

Yet, for almost all of their topical content, the Metamorphoses are only one of several sources; many of the myths recounted by Ovid are also to be found in other collections, such as those by Hesiod, Homer (of course), Vergil’s Aeneid (ditto), even historians such as Plutarch and Livy — as mythology and history formed a seamless blend in Antiquity — and, especially, also the Library of Greek Mythology traditionally attributed to Apollodorus of Alexandria.

So for comparison’s sake, I also consulted some of these sources; namely, Apollodorus’s Library — which contains among the most detailed renditions extant of both the Perseus and the Theseus myth — as well as Plutarch’s Life of Theseus, which collectively relies on all Greek sources available to Plutarch (some of which are now considered lost) and gives an overview of the, in part, substantially different versions of the Theseus saga.

(Just in case, for those unfamiliar with Greek mythology:

Medusa was a Gorgon, one of three erstwhile very beautiful sisters bewitched so as to have snakes for hair; whoever looked directly at Medusa’s face was instantly turned to stone. Perseus was able to kill her after the goddess Athena (Minerva to the Romans) had given him a shield polished to mirror clarity; he cut off Medusa’s head while she was sleeping and later used it to rescue a princess (Andromeda) from a sea dragon — as a result of which her grateful parents gave him Andromeda’s hand in marriage — and to defeat his own enemies, including Andromeda’s former suitor.

The Minotauros was half human and half bull; he was the offspring of an adulterous relationship of the wife of the king of Crete (Minos) and the sacred bull of Zeus (to the Romans; Jove / Jupiter). (Minotauros means “Minos’s bull”). As a result of a war between Crete and Athens that Crete (Minos) had won, Minos was entitled to demand tribute from Athens, and his demand was a yearly tribute of seven Athenean young men and seven Athenean virgins.  Theseus, the son of Athen’s king, sailed to Crete as one of the seven young men to be delivered on the third such voyage, and with the help of Minos’s daughter Ariadne (who had fallen in love with him and had given him a thread so as to not lose his way), he was able to make his way into the labyrinth where the Minotauros was kept and kill the monster, thus freeing Athens from its obligation.) 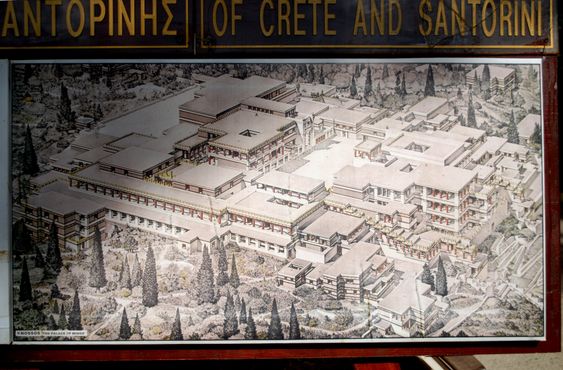 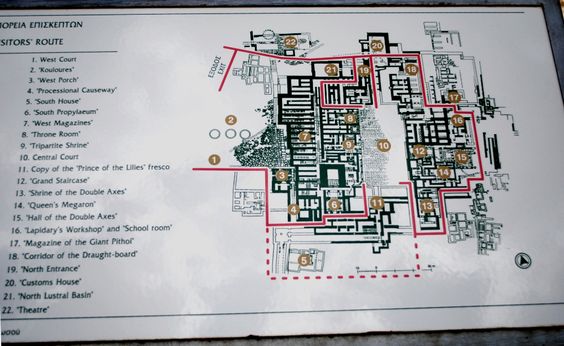 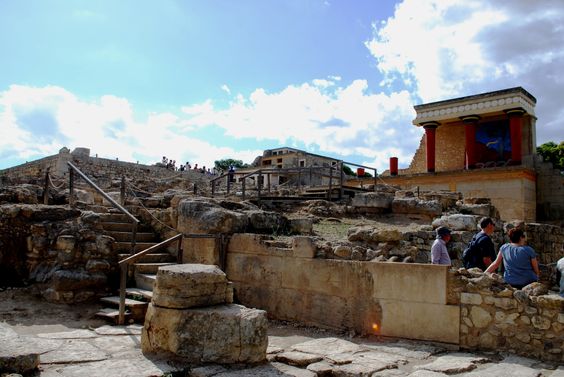 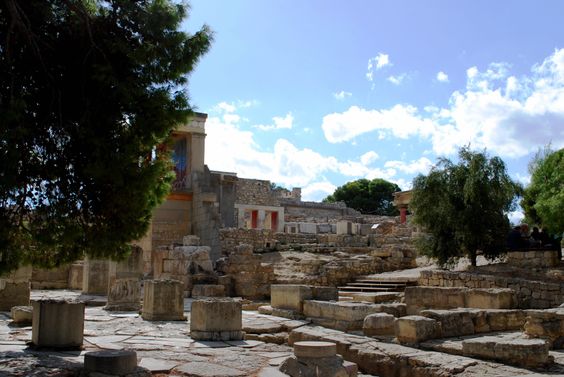 The Minoan Palace at Knossos, Crete:

Even in Antiquity, not everybody believed the version that Minos had a labyrinth built in which to hide the Minotauros, and indeed, the royal palace itself consists of such a myriad of rooms and hallways that it must have been very easy to get lost there: very likely it was reports of the palace itself that were embellished and expanded on in the process of repetition, until the legend of the labyrinth was born. (Photos: mine.) 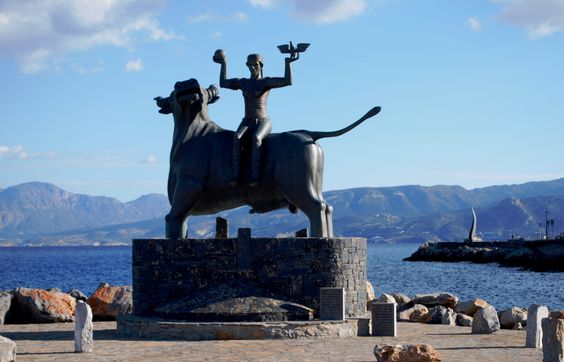 Agios Nikolaos, Crete: Statue of Europa and the Bull

Crete is the location of a number of important Greek myths; among others, that of the abduction of Europa by Zeus / Jupiter, who is believed to have approached her in the guise of a bull.  This story, too, is (of course) recounted in Ovid’s Metamorphoses. (Photo: mine.)