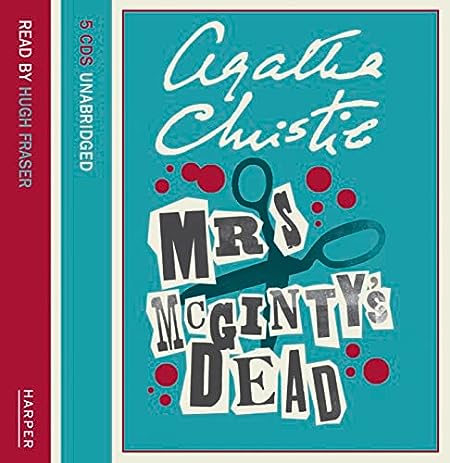 This was a return visit courtesy of Hugh Fraser, the Captain Hastings of the long-running TV series starring David Suchet as Poirot, who has since come to narrate audio versions of almost every single Agatha Christie mystery.* — After having appeared alongside David Suchet in countless Poirot TV episodes, Fraser has Suchet’s mannerisms as the Belgian detective down fairly pat, and he did indeed say in an interview that his reading was intended to keep faith with Suchet’s performance (as in, how could it possibly not).  There are a couple of audio collections where both of them appear, and in those you can tell the two narrators apart, but to anyone hearing just a recording by Fraser and not listening too closely, his narration is pretty darned convincing and contributes greatly to the listening pleasure.  In this instance, for Fraser’s reading alone I upped my previous rating of a story I already liked considerably by yet another notch.

Mrs. McGinty’s Dead provides several of Christie’s recurring motifs and settings: Poirot’s sidekick is (not Hastings, but instead) Christie’s own mock-stand-in, Ariadne Oliver; the novel is set in a small town (named Broadhinny) — even though this is ordinarily more Miss Marple’s territory than Poirot’s –; its title is based on a bit of poetic doggerel repeated in various forms throughout the story; and Poirot is called in at the last minute (by the policeman formerly in charge of the case, no less) to prevent a deadly miscarriage of justice.  The element striking terror in Broadhinny is not necessarily the murder itself — the victim was a gossipy elderly charwoman who didn’t greatly seem to matter; the man convicted for her murder is her former lodger, who is socially and as a person even more insignificant than his supposed victim — but the arrival of Poirot and the facts revealed by his investigation: Starting with a newspaper article that he finds among the dead woman’s last possessions, he investigates the local population’s connections with a number of gruesome past crimes portrayed in that article, and he soon comes to conclude that several inhabitants of Broadhinny have more than a few skeletons of their own in their closets; in fact, more than one of them may have been involved with (or may be related to persons involved with) the crimes described by the newspaper. — Along the way, we get a few pointed insights into Christie’s own woes (uttered by Ms. Oliver, of course) regarding the less-than-faithful stage adaptations of her works … and Poirot, to the reader’s considerable amusement, gets to suffer … not only the all-around unpleasantness of the British countryside, but also the horrors of a thoroughly chaotic and untidy boarding house, complete with water-drenched, overcooked, and generally tasteless cuisine (and this, after having agreed to take on the case upon having just returned from his favorite gourmet restaurant in London!).

* The exceptions are a couple of Poirot books recorded by Suchet himself, the Miss Marple mysteries (narrated by the BBc’s [and Christie’s own favorite] Miss Marple — Joan Hickson –, as well as the fabulous Stephanie Cole and, lately, Richard E. Grant), and a few short stories narrated by Isla Blair and Sir Christopher Lee.